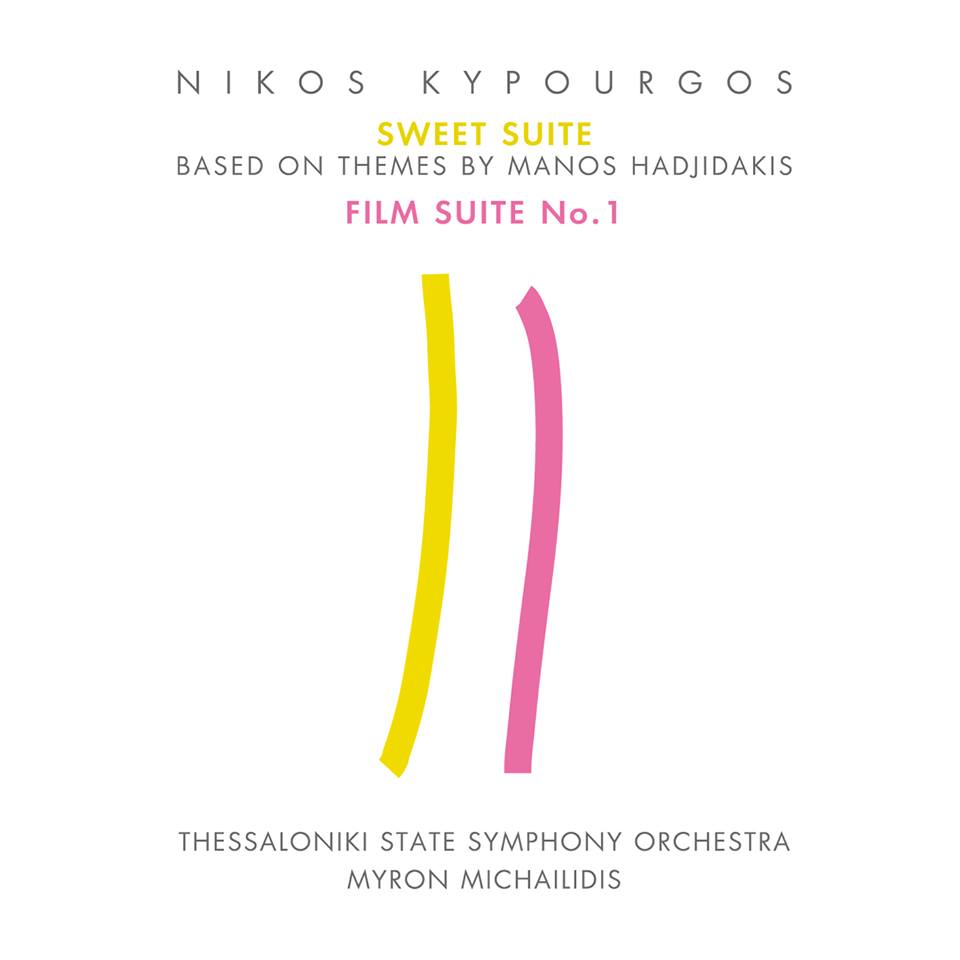 Sweet Suite (based on themes by Manos Hazdjidakis)   31.36

Sweet Suite
Manos Hadjidakis had a special love for cinema and developed a close relationship with film music since a very young age. Contemporary with the golden age of Greek popular cinema, he had the opportunity to experiment with orchestras and try techniques he admired in Hollywood scores of Max Steiner, Miklos Rozsa, Alex North, Erich Korngold, Bernard Herrmann, and European scores of Maurice Jaubert and Nino Rota, composing an abundant and diverse body of work. One can discover hidden treasures, not only in films such as Elia Kazan’s America-America or Jules Dassin’s Never On Sunday, but also in cases where he was asked to score less important films, like the documentary Greece, Land of Dreams.
I first met Hadjidakis in 1972, when he returned from the US. I had the chance to be his musical assistant for the films Faccia di Spia (1975) and Honeymoon (1979). Our collaboration was a great experience, and watching him work turned into a valuable lesson. Building up the courage, I started making suggestions: a couple of notes in the beginning, and then suggestions for harmonic changes… While working on the film Memed, my Hawk (1984), I was promoted to a collaborative role, writing the music for entire scenes. (In the first version of Sweet Suite, music extracts from all these three films were included, but finally I decided to keep only Honeymoon).
But my closest collaboration with Hadjidakis is Free Diving. Perhaps because he was not there anymore, I felt I was carrying a tremendous responsibility on my shoulders. The story: Hadjidakis had promised to Giorgos Panoussopoulos, the director, to write music for his film, but unfortunately he did not live to do so. When Giorgos asked me to materialize this collaboration, I chose to base the whole score on two of Hadjidakis’ themes from his work “Rythmology” for solo piano, mostly focusing on the piece “9/8, in the style of Erik Satie”. Many considered this an audacious move, but I don’t think that Hadjidakis held a grudge.
It was then that I thought I should try pushing things forward, to create a “homage to Hadjidakis”, based on his film music. This idea turned into reality ten years later, when the Greek Festival and Yorgos Loukos commissioned Sweet Suite, which was first presented in 2006 at the Odeon of Herodes Atticus by the Enarmonia Orchestra under Lukas Karitinos. It took another ten years to reach the current recorded edition, which could not have been possible without Myron Michailidis’ decisive initiative: In 2009, he chose, conducted and recorded the work splendidly with the Thessaloniki State Symphony Orchestra.
Sweet suite is based on Hadjidakis’ themes from nine films: Greece, Land of Dreams (1961), Blue (1968), The 300 Spartans (1962), Lost Dreams (1961), Sweet Movie (1974), Free Diving (1995), Never On Sunday (1960), Honeymoon (1979) and America-America (1963). After listening to his whole film music oeuvre multiple times, I concluded on these nine out of almost seventy-five films, searching for themes – some known and familiar, some obscure – that could form a complete work through all their oppositions, their variety of styles and their individual autonomies. The selected themes constitute the nine sub-suites, which are connected one to another without pause.
It may seem odd, but as time goes by, every time I set myself to work on Hadjidakis’ music, I feel that, on one hand, he gets more and more demanding while, on the other hand, he grants me more and more freedom. In this particular work, I kept the melodies unchanged, but I took every freedom with structure, harmony, counterpoint, and rhythm, thus expressing my personal view.
As for the orchestration, I chose a medium sized symphonic orchestra, but I wanted to enrich it with instruments that Hadjidakis himself was fond of, like the piano, the guitar, the harpsichord, the mandolin, the accordion. It was only in the music themes from Blue that I kept the basic elements of the initial orchestration (which by the way hadn’t been created by Hadjidakis, but was very close to his style), elements I had already worked out during the transcription of the score for the first execution of this work in Greece, in 1997 by the Orchestra of the Colors.
I believe that, besides that fact that Hadjidakis used to characterize himself as a songwriter, he should be equally valued for his contribution to orchestral music. The form often refers to the form of songs, but his melodic lines are clearly differentiated, producing purely orchestral music. His love for the classic composers of his century, like Mahler, Prokofiev, Stravinsky, Shostakovich, Satie, Milhaud, among others, has left some traces behind, with some more or less obvious and conscious references. This is something I would not leave unexplored.
Here, this cycle seems to close. I hope, dear Manos, the next time we meet, you’ll be strict with me as always, but you won’t call me lazy. Anyhow, I’ve learned much from you.

Film Suite No. 1
In my mind, this work is associated with two of my favorite cities. Thessaloniki, where the music of these films was first premiered during the city’s Film Festival (and well received, judging from the awards it won) and Patras, where, in 1994, it was played for the first time as a single work, by the Soloists of Patras, an excellent orchestra, led by the conductor Dimitris Botinis, who commissioned the work.
The suite is based on themes of eight films from the 5-year period 1990-1994: Dimitris Mavrikios’ Aenigma Est (1990), Lefteris Xanthopoulos’ The master of the Shadows (1990), Giorgos Karipidis’ Dead Liqueur (1992), Angeliki Antoniou’s Donusa (1992), Thanassis Rakintzis’ Ariadne lives in Leros (1993), Panos Karkanevatos’ Borderline (1994), Stelios Pavlidis’ Presumed Suspect and Yiannis Typaldos’ Terra Incognita (1994), and also the 1992 TV series The Guards of Achaia.
Originally the work was composed for string orchestra (with a leading solo violin) and piano. In this new version from 2009 the piano part is replaced by vibraphone and marimba.
The suite has also been transcribed for string quartet and, in both versions, it has been often performed in Greece and abroad.