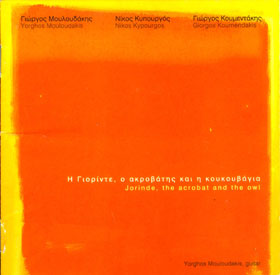 The young man and the owl

Suite for the Grimm brothers

[…] «Nina Images for guitar», states Nikos Kypourgos. Is based upon simple and brief music themes composed from 1990 up until 1996, in which year they were compiled to farm a unified work for guitar. “At times, these themes grew to acquire different forms and were employed in order to accompany stage or film images that – by coincidence or not – were all related to children.» The common characteristic of these themes that helps them gain dis­tinction through the guitar, is the almost persistent recurrence of a melodic, harmonic or rhythmic idea”, («The Empty Square» being a most typical example). Kypourgos’ pieces do not conceal the fact that they were originally written in order to accompany images; yet, the manner in which they are structured and in effect “taken to pieces” – like fitting dolls or chil­dren’s puzzles – renders them musically independent. His music pieces urge the listener to complete them with images, and ultimately put them together under a single narrative. The fairy tale-like narration has played a decisive role in Kypourgos’ work. Let us not forget that the composer became widely known to the general public in Greece through his partici­pation in the creative group of «Lilipt”4, the songs of which accompanied the most suc­cessful contemporary Greek tale. Perhaps this experience (but also his subsequent engage­ment in music for the stage and cinema) is not unrelated to the way he has been treating music: that is, both as internal and external narrative process. Alternatively speaking, music is the means to recount a story, but also the material and basic symbol of that story. For instance, the music arrangement for the tale «The king is naked (1995) Is typically indicative of the afore-mentioned approach: at the end of the tale, when the king is found stark naked out in the street, and all those present succumb to the collective paroxysm of “his attire is the most beautiful in the world», the orchestra stops playing. And yet musicians and con­ductor alike keep on making the same movements, as if they are still performing. After a short period of deathly silence, with the audience wondering whether they should applaud or just try to listen to something controversial beyond their grasp, a little child is heard shouting, by analogy with the tale: “I can hear nothing – the musicians have stopped playing!»

Try to treat this album as a similar tale, as if the guitar ceaselessly laboured to remind us of a memory by definition and not by recollection. A memory wholly fashioned in the pre­sent, with no past. As if the story itself said that the whole of its craft resides in the perplexing ambiguity of a bare memory.